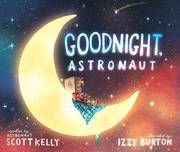 by Scott Kelly with Emily Easton ; illustrated by Izzy Burton

From childhood, an astronaut dreamed of adventurous exploration.

Famed NASA astronaut Kelly played imaginative games with his twin brother, Mark (also an astronaut), from the time they were kids, presaging both men’s future space careers by wearing cardboard-box helmets. Their mother supported their high-flying dreams at bedtime. Ever entranced by the sky, the brothers imagined aboveground adventures in the backyard treehouse and on a family cruise, where they fantasized about being weightless as the boat was tossed by the waves. In adulthood, Kelly undertook hardier journeys, and his dreams continued to spark his longings for space navigation: He steered Navy vessels and piloted jets; camped out in icy climates and explored the seas; and climbed Mount Everest. Kelly attained his astronaut goal by joining the crew of the space shuttle Discovery, then earned renown for his yearlong stint on the International Space Station. Though Kelly acknowledges home is best, he encourages readers to dream about having adventures; a charming concluding illustration features a brown-skinned girl dreaming of myriad possibilities. The engaging, gently poetic text describes the author’s ambitious, lifelong skyward trajectory and his stops along the way to space, helping youngsters understand what goes into astronaut training. Colorful, appealing illustrations capture Kelly’s fascinating odyssey, beginning in childhood, and the starry reaches of space. Scott and Mark Kelly present White; some background characters are people of color. The backmatter includes two pages of color photos. (This book was reviewed digitally with 9-by-22-inch double-page spreads viewed at 49.9% of actual size.)