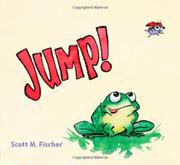 Nature’s predatory pecking order reveals itself in bouncy rhymes and goofy illustrations. A fly, a frog, a cat, a hound, a crocodile and a shark get gobbled in succession after dramatic, last-ditch escape attempts. Each verse, sung from the animal’s perspective, ends with an ellipsis, followed by a double-page spread of the critter leaping to save its hide. Children will enjoy helping the animals scram by shouting the word “JUMP!” which appears on these pages in large, expressive lettering. Fischer cleverly leaves the lip-smacking gore off the page, keeping his picture book palatable. Readers receive only mild, comic clues about the animals’ demise. A frog leg dangles limply out of the cat’s mouth just before the hound lunges, and the final page shows all the animals tumbling, disheveled, out of a whale. Hammy illustrations keep the laughs coming with bold strokes of charcoal, bright colors, bulging cartoon eyes, gaping mouths and lolling tongues. (Picture book. 3-7)