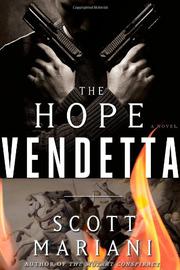 On the brink of suicide following his wife's death, one-time British special-forces operative Ben Hope is intent on putting his violent past behind him and studying religion at Oxford. But when a family friend's daughter, a renowned biblical archaeologist, goes missing in Greece—and the young friend Ben sent to find her is killed in a bombing—Ben is forced to dust off his killing skills and spring back into action.

The stakes are big in Mariani's second Hope novel (The Mozart Conspiracy, 2011). Zoë Bradbury is abducted because she says she discovered an artifact that exposes as false the Book of Revelation and its ultimate promise of Rapture. This rankles an international conspiracy bent on using Revelation to orchestrate the destruction of Israel by Islamic forces. The discovery also upsets the plans of Clayton Cleaver, a popular TV evangelist in Georgia who has based his political hopes on the prophecies. Frustrated by Zoë's amnesia, caused by a head injury, her abductors threaten to inject her with a newly invented truth serum that will reduce her to psychotic rubble. Ben's pursuits take him to Savannah, where he learns that Zoë, an Amy Winehouse–like party girl, was blackmailing Cleaver. Rendered unconscious by the bad guys, Hope wakes up in Montana, where he has relatively little trouble dispatching the bad guys with the help of a smitten female CIA agent. The story takes us, finally, to Jerusalem, where Hope must thwart plans to blow up the Dome of the Rock. Mariani constructs the thriller with skill and intelligence, staging some good action scenes, and Hope is an appealing protagonist. However, the book's premise is undercooked. There's little threat of worldwide upheaval, or much of a threat to the principals. The book might well have been better off eschewing its Dan Brown Da Vincisms and turning up the tension on the more grounded elements of the story.

A solid thriller that leaves you thinking it could have been much better.