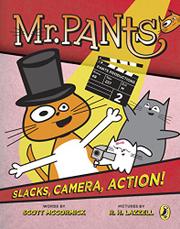 From the Mr. Pants series, volume 2

Mr. Pants, his human mother and his feline sisters return for a second graphic-novel-format chapter book.

Armed with a video camera, Mr. Pants wants to make a spy movie to win a contest and get enough money to go to Hawaii, but chores and his little sister Grommy’s tea party stand in his way. Meanwhile, middle child Foot Foot desperately wants to find out the end of her (mind-numbingly lame) bedtime story, but someone has ripped out the last pages. The library’s not open; the bookstore is fresh out! Grommy’s guests arrive, and they have no interest in being in Mr. Pants’ movie. Hilarity does not ensue. McCormick has dialed way down on the above-age-level attempts at humor all too present in the first Mr. Pants tale, but he’s left in the annoying behavior of his cat stand-ins for human kids…though it has been tempered a bit. Mr. Pants’ finished movie, pieced together and overdubbed by the whole family, is painfully unfunny to read. The over-the-top, fake exuberance of the characters and the tedium of the plot are compounded by the staginess of Lazzell’s flat-colored, often horizontal panels.