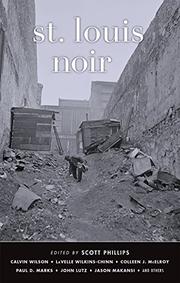 Joining Seattle, Memphis, Phoenix, and other noir outposts, St. Louis gets a turn to show its dark side in Phillips’ collection of 13 dark tales and a poetic interlude.

When they’re not providing material for Michael Castro’s four short poems, people in the nation’s heartland hurt each other for every reason and for practically no reason at all. Sometimes it’s just business, as the folks in Chris Barsanti’s “The Pillbox,” Jason Makansi’s “Tracks,” and Umar Lee’s “A Saint Louis Christmas” know. Sometimes it’s what LaVelle Wilkins-Chinn calls “that crazy little thing called love” in “Fool’s Luck.” Families bring their share of hurt, as S.L. Coney in “Abandoned Places,” Laura Benedict in “A Paler Shade of Death,” Jedidiah Ayers in “Have You Seen Me,” and editor Phillips in “One Little Goddamn Thing” agree. There’s revenge, as John Lutz shows in “The Brick Wall.” And plain old bad luck, as Colleen J. McElroy attests in “Blues for the River City.” Sometimes, finally, it’s a combination of all the above, as in Paul D. Marks’ “Deserted Cities of the Heart.” But whatever the cause, it’s all just people.