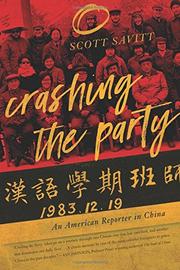 An American Reporter in China

Savitt, the in-house Chinese-English translator for the New York Times, opens with a dramatic tableau of his own experience in 2000 as a hunger-striking detainee. He then rewinds the narrative to his arrival in 1983 as one of China’s first cross-cultural exchange students, traveling from Duke University to Beijing Teacher’s College. He was enthralled by a society encountering its first new freedoms. “The Chinese have had every aspect of their lives dictated to them for decades,” he writes. “Now they’re collectively removing their shackles and a vibrant society is sprouting up between the cracks of grey official Communist culture.” Handling China’s still-intense restrictions with a chipper optimism, he quickly made friends in an embryonic circle of musicians, bohemians, and academics, many of whom would later gravitate toward the pro-democracy movement. Such social mixing was frowned upon by the authorities, but Savitt’s language and networking abilities advanced his journalistic career. At age 25, he became a UPI correspondent, in time to witness the infamous crackdown on the long-simmering progressive movement in Tiananmen Square, which he portrays in a grim, exciting set piece suggesting that greater brutality occurred than the West knew. Jumping forward to 1993, as online culture was just beginning, Savitt founded an unsanctioned English-language newspaper, assured by his connections that the Communist Party would take a “one eye open, one eye closed” attitude toward such a rebellious endeavor. While this proved true for a while, he was eventually arrested and treated brutally for not informing on his native-born colleagues. Savitt portrays such gritty adventures with an incongruously cheerful tone; he’s observant of every level of everyday life as China lurched toward state-monitored prosperity. Some narrative jumps lessen his tale’s overall coherence, and it ends abruptly, with Savitt unceremoniously expelled and no resolution of the newspaper’s drama.

An energetic memoir that captures the collision between an open-hearted iconoclast and a free-market totalitarian state.