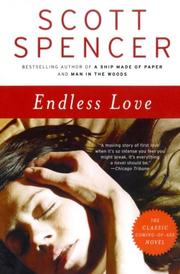 How can a book that has so much wrong with it be so powerful? That's what adventurous readers will be asking about this latest work by the author of Preservation Hall (1976)--a possessed new novel that contorts its unshapely plot with coincidence, plunges the reader into whorls of excess, and hinges all on an obsession that Spencer never really bothers to make believable: narrator David Axelrod's ""endless love""--from mid-Sixties teenage to mid-Seventies manhood--for Chicago schoolmate Jade Butterfield and her whole beautiful, bohemian, ex-uppercrust family. David's narrative begins on August 12, 1967, the night he burned down the Butterfields' house, from which he'd been expelled after months of sleeping in with Jade: ""I started the fire so the Butterfields would have to leave their house and confront me."" This gets him sent to a comfy loony bin for a few years--a financial strain for his 1930s-style leftwing parents--and all the Butterfields are pronounced strictly off-limits forever. But David's love is endless, so, once out on parole, he tracks down Jade's literary, seductive mother (now separated) to New York; and soon he's Manhattan-bound, leaving behind his smarmy parole officer and his suffering parents. (His father's ditching his mother for a dying black woman.) Will David be reunited with Jade? Yes, of course--but only through coincidental calamity: while on Fifth Avenue, David is spotted by Jade's father, who is promptly killed while lurching out into traffic to tackle the hated David. The funeral brings Jade to N.Y.--and to David's hotel room for hours of ugly-beautiful sex, which, because Jade is menstruating, leaves them both covered and caked in blood. But this idyll--which moves up to Jade's shared house in Bennington--can't last, especially once Jade finds out exactly how her father died. So it's fury, fits, and back to the nuthouse for David. . . . Why, then, if we never quite believe in David's obsession, does most of this book compel? Because of Spencer's moment-by-moment perception, detail, and comic/dramatic scene-making. Because of the gorgeously stark prose (though flawed by overeager similes and lazy descriptions--Jade's female exdover looks ""rather like Joni Mitchell""). But, above all, because whether David's particular excessive fixation convinces on a literal level, his story works absolutely as a massive metaphor for whatever endless loves, hates, or fears the reader brings to the book: ""If endless love was a dream, then it was a dream we all shared, even more than we all shared the dream of never dying or traveling through time, and if anything set me apart it was not my impulses but my stubbornness, my willingness to take the dream past what had been agreed upon as the reasonable limits. . . . ""With all its flaws, excesses, and perversities--daring, original, and important work.