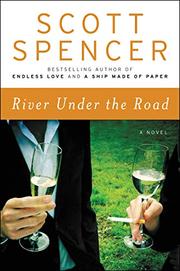 RIVER UNDER THE ROAD

The story of two couples, recounted across 14 years through the lens of a dozen parties.

Parties are often where we reveal ourselves, inadvertently or otherwise—we get drunk, we flirt, we say things we shouldn't have said. But if such a notion is central to this novel (each chapter opens with an invitation, as if to highlight the conceit), too often the narrative meanders, losing sight of its characters, or of their unhappiness, in the mechanics of the social whirl. At the center of the action are Thaddeus, a screenwriter, and his wife, Grace, an artist who drifts away from her art as the pair moves from bohemia into the bourgeoisie. “Their marriage seemed stale, maybe it was dying,” Spencer (Man in the Woods, 2010, etc.) tells us. Or, as Grace murmurs to her husband one evening, regretfully, “Not exactly the life we had in mind.” These dissatisfactions are only exacerbated by the presence of the second couple, especially the husband, Jennings, who is both a local Lothario and a kind of handyman/fixer on Thaddeus and Grace’s Hudson River estate. Money is an issue throughout the novel—who has it and who doesn’t, what one must do to get it, what happens when it goes away. More to the point, however, this is a book about the vicissitudes of love. Thaddeus and Grace, Jennings and his wife, Muriel: they love one another, after a fashion, but in both marriages, love is not enough. Each character is beset by his or her own frustrations, by the difference between what they wanted and what they’ve got. That may be a universal condition, but as the novel progresses, the world it portrays begins to narrow and the relationships fall into predictable lamentations, mostly involving the inability of privilege to console. Such a conflict can be compelling, but the characters here lack a certain necessary self-awareness, leaving their disappointments (with the world, with one another) to register mostly at the level of complaint. “What…is happiness anyhow?” Thaddeus pouts. “It’s so stupid. Even the word happiness sounds sort of ridiculous. I don’t care about happiness. I just want to be with you.”

Spencer's novel makes some trenchant observations about love and loss, about growing up and growing apart, but in the end, it can't quite get out of its own way.