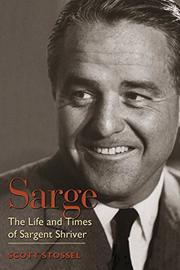 The Life and Times of Sargent Shriver

An overstuffed but highly readable biography of the liberal stalwart who founded the Peace Corps, Head Start, Special Olympics, and many other good causes.

Sargent Shriver was a long-suffering soldier in difficult crusades, writes Atlantic Monthly editor Stossel; a devout Catholic and the scion of Confederate heroes, he felt it his duty, as he wrote while serving as an editor at the Yale Daily News, to “believe that things can be accomplished; that those who have ideals and are willing to work for them can attain their ambitions; in short, that the world is not too much with us but by sincere and untiring effort can be made a better place to live in.” Shriver’s collegiate idealism never faded, though it shifted at points; his service in the US Navy in WWII, for instance, removed any glamour he might have found in war, though he forever remained a tough anticommunist and Cold Warrior. Indeed, writes Stossel, it was Shriver who brought Robert McNamara into the Kennedy administration, “having been impressed, some years before, by a report on McNamara and the other ‘whiz kids’ hired by the Pentagon as a management consultant in the 1940s.” Shriver himself came into the Kennedy fold, famously, through marriage to Eunice Kennedy, and served as Joseph Kennedy’s eyes and ears at the Chicago Merchandise Mart for many years, building valuable political contacts in the business community. “Shriver,” writes Stossel, “could be sensitive about his relationship to the Kennedy family” and once snapped at a reporter that his relationship to President Kennedy was “a fact of life, why think about it at all? I’m perfectly capable of looking after myself.” So he was, Stossel writes, steering the sometimes unwilling Kennedy, Johnson, and Nixon to do good deeds, though never attaining elective office himself. Throughout it all, Stossel depicts Shriver without a halo, though he contends, with other observers, that Sargent and Eunice Shriver will one day be beatified by the Catholic church.

A careful and capable portrait, of much interest to advocates of activist, beneficent government and students of the Kennedy era alike.