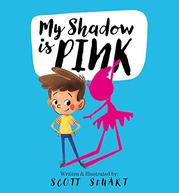 MY SHADOW IS PINK

In this world, everyone has a sentient, self-directed shadow that represents their innermost self. The White, floppy-haired main character explains that his shadow “is quite different, it’s not what you think.” Most of the shadows in his family are blue, but his is pink and “loves…princesses, fairies, and things ‘not for boys.’ ” In awkward rhyming couplets the narrator anxiously awaits the first day of school, where all of his apparently mixed-gender classmates seem to have blue shadows. When he's instructed (via a rhyming note) to wear his shadow’s “favourite thing” to school, he arrives in a tutu—then runs home when everyone stares at him. His father, a burly masculine triangle of a man and also White, dons a pink hooded dress in solidarity to escort his son back to school, and all is well. The central conceit of this story leaves many questions unsatisfyingly unanswered: Many girl-presenting classmates have blue shadows, so how are shadow colors assigned at birth? How can a person’s shadow have a discrete sexual orientation? Why use rhyming couplets when they lead to tortured constructions like “I join a small group, though in I don’t blend”? (This book was reviewed digitally with 10.8-by-20-inch double-page spreads viewed at 20.8% of actual size.)

As a parable of gender nonconformity this is too disjointed to work. Don’t bother.