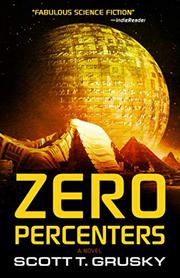 In 2024, fantastically successful tech tycoon Chris Lapin and his team launch their latest innovation: a computer algorithm that simulates organic tissue. Lapin’s 25-year-old naturalist daughter, Anja Lapin, finds the idea of her father’s company’s raking in more riches repugnant, as the ills of income equality affect the entire planet. She goes on a sabbatical in the Transylvanian wilderness, causing her to be cut off from civilization. Meanwhile, Lapin’s group sees no reason to stop at making replacement organs; their algorithm can completely digitize an entire, live human, consciousness and all. Anja returns from her meditative trip to find that billions of people have chosen to become digital—or “zero percenters”—over the course of just days. Thus, a peaceful world no longer faces hunger, illness, aging, or even sleep, and everyone inhabits shape-changing new bodies that eliminate any need for commerce or environmental exploitation. However, it turns out that Chris and most of his workmates are dead from a mysterious drone attack. And because anti-capitalist Anja is regarded as the inspiration for her father’s making the process freely available, people are hailing her as the savior of the planet—and promptly elect her president of the new World Council. Yet she faces the dilemma of whether to remain a mortal, vulnerable, flesh-and-blood person herself—a situation that’s further complicated with the appearance of Gunnar Freesmith, an attractive, athletic man who also isn’t a zero percenter yet.

The story is narrated by “Vicia Cassubica,” who readers come to understand is actually Anja’s newly assigned “concierge”—a faithful smartphone that’s been upgraded into a shape-shifter factotum (and whether Vicia has a soul becomes a matter of much discussion). Clearly, the tale isn’t based in hard science but rather in science that’s indistinguishable from mysticism. With utopia basically achieved in the book’s opening chapters, the author faces something of a problem—much as Richard Matheson did in 1978’s What Dreams May Come: how to describe heaven and how to create dramatic conflict in a place that passes for paradise. Yes, there is a villain slithering through this version of Eden, but both Anja and the author keep that character as ill-defined as possible. There’s also the inescapable notion that Anja and Gunnar will eventually find themselves in roles of the biblical Eve and Adam; however, they manage to talk their way around the matter until circumstances render it moot. Overall, the material is a close relation to the philosophical fantasy of bestselling author Richard Bach of Jonathan Livingston Seagull (1970) fame; just as Bach’s repertoire returns, time and again, to backdrops of flight and aviation, Grusky offers scenes of mountaineering and skiing, with a meticulously described description of a hike in the Chilean Andes. However, this choice effectively relegates the startling transfiguration of all Homo sapiens to background detail.

A cloud-minded but detailed spiritual parable that eschews the trappings of hard SF.