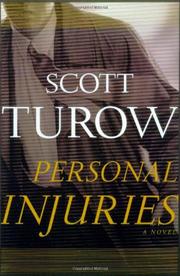 The undisputed dean of legal intrigue (The Laws of Our Fathers, 1996, etc.) burrows deep into the muck surrounding the attempt to turn a dirty lawyer into an informant against the judges he’s been bribing. Now that the feds have discovered the secret bank account he’s been using to pay off some of the Kindle County judges who’ve been ruling on his cases, Robbie Feaver is ready to roll over on Their Honors. He’ll wear a wire to his meetings with their bagmen, hoping to get enough evidence to persuade at least four judges—party hack Barnett Skolnick, alcoholic Gillian Sullivan, scholarly Silvio Malatesta, and aggressive black ex-athlete Sherm Crowthers—to testify against the big fish the Feebs are really after: Brendan Tuohey, Presiding Judge of the county superior court’s common law claims division and uncle of Robbie’s benighted partner, Mort Dinnerstein. And while he’s waiting for the chance to get the goods on his former co-conspirators, Robbie will accept the constant companionship of FBI agent Evon Miller, disguised as one of the paralegals he can’t stop chasing even as his beloved wife Rainey is descending into the excruciating final stages of Lou Gehrig’s disease. It all sounds simple, and in the hands of a lesser storyteller the pivots of suspense would be utterly predictable: Will Robbie get found out? Will the bugging equipment actually work? Will the little fish he lands agree to turn on the big fish? All these problems come up here, all right, but, as usual, Turow is less interested in creating dangers for his hero than in exploring the ethical dilemmas of ambiguous legal situations—in particular, the morality of undercover work, whether the undercover ops are FBI agents or bogus lawyers the government can’t make parties to defrauding innocent clients, and whether it involves lying about your political debts, your sexual preferences, or your personal loyalties. The result is a revelation—a subtle, densely textured legal thriller stuffed with every kind of surprise except the ones you expect. Turow is well on his way to making Kindle County the Yoknapatawpha of American law.