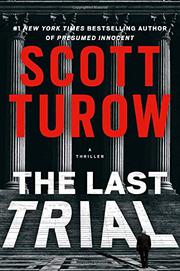 Trying his final case at 85, celebrated criminal defense lawyer Sandy Stern defends a Nobel-winning doctor and longtime friend whose cancer wonder drug saved Stern's life but subsequently led to the deaths of others.

Federal prosecutors are charging the eminent doctor, Kiril Pafko, with murder, fraud, and insider trading. An Argentine émigré like Stern, Pafko is no angel. His counselor is certain he sold stock in the company that produced the drug, g-Livia, before users' deaths were reported. The 78-year-old Nobelist is a serial adulterer whose former and current lovers have strong ties to the case. Working for one final time alongside his daughter and proficient legal partner, Marta, who has announced she will close the firm and retire along with her father following the case, Stern must deal not only with "senior moments" before Chief Judge Sonya "Sonny" Klonsky, but also his physical frailty. While taking a deep dive into the ups and downs of a complicated big-time trial, Turow (Testimony, 2017, etc.) crafts a love letter to his profession through his elegiac appreciation of Stern, who has appeared in all his Kindle County novels. The grandly mannered attorney (his favorite response is "Just so") has dedicated himself to the law at great personal cost. But had he not spent so much of his life inside courtrooms, "He never would have known himself." With its bland prosecutors, frequent focus on technical details like "double-blind clinical trials," and lack of real surprises, the novel likely will disappoint some fans of legal thrillers. But this smoothly efficient book gains timely depth through its discussion of thorny moral issues raised by a drug that can extend a cancer sufferer's life expectancy at the risk of suddenly ending it.

A strongly felt, if not terribly gripping, sendoff for a Turow favorite nearly 35 years after his appearance in Presumed Innocent.