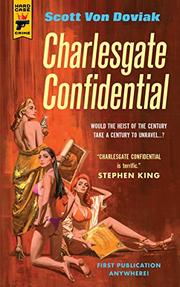 Wondering who pulled off the never-solved 1990 heist at Boston’s Isabella Stewart Gardner Museum, which netted the thieves the richest haul still unrecovered in the history of art theft? Von Doviak’s waggish debut has the answer to this question—and much, much more.

In 1946, according to Von Doviak, two fake cops who gained admittance to the museum late one night along with their confederates make off with a collection of 13 artworks by Rembrandt, Vermeer, and more, worth an estimated $500 million. Despite intensive investigation and a well-publicized, high-figure reward, the case remains unsolved in 1986, when Tommy Donnelly, a student living in Emerson College’s Charlesgate student residence, a former hotel with a colorful history, sets out to write Charlesgate Confidential, a history of the place, and swiftly finds links between the Charlesgate, which in its day hosted everything from Jimmy Dryden’s stable of prostitutes (sixth floor) to Dave T’s high-stakes poker game (eighth floor) and the storied robbery. The most intriguing link: Days before the robbery, three gunmen swooped down on Dave T’s, made off with the proceeds, and returned shortly after the robbery to execute Fat Dave, the Red Room Lounge bartender who identified them to their victim, whom he calls "Other Dave," leading to the conscription of one of the gunmen as a fake cop in the museum robbery and his violent death. In 2014—are you still following this?—a reunion of Tommy Donnelly’s Emerson class spearheaded by classmate Jackie St. John digs even deeper into the past, which has now gotten pretty doggone deep.

Instead of presenting these three narrative layers in chronological order, Von Doviak cuts constantly from one to the other in a wildly inventive fantasia spiced with frequent revelations of new crimes and new solutions. The only downside: The last round of revelations doesn’t carry any more weight than the others.