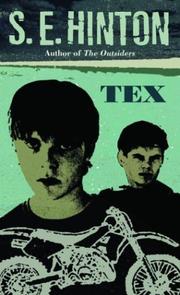 Aimless and trouble-prone, Tex lives with his responsible older brother Mason, 17, an ace basketball player said to be ultra-popular (though he appears markedly unsociable) and determined to go on to college and away from small-town poverty. Their mother is dead and their father a here-and-gone rodeo bum. Into this standard Hinton set-up the author packs her usual abundance of violent action and violent justice. On the day Mason learns he has an ulcer and meets an old buddy now flush from drug dealing, the brothers are kidnapped by a hitchhiking escaped murderer, end up on TV, and get a call from their long-absent Pop. On the day Tex gets in bad trouble at school and learns that Pop (who has always favored Mason) is not his Pop, he runs into the drug dealer and ends up near-fatally shot in a druggy argument with a ripped-off buyer. Though all Hinton's books since the first are reminders that the nerve she hit in The Outsiders can't be so tapped again, she continues to handle her obvious exhortation, melodramatic plots, and brotherly bonds with that disarming empathy—this time, for the mixed-up kid who is going nowhere but getting straight—which wins kids' unqualified assent.