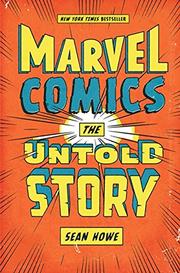 Former Entertainment Weekly editor Howe (editor: Give Our Regards to the Atomsmashers!: Writers on Comics, 2004) interviewed more than 150 former Marvel employees, freelancers and family members to weave together a tapestry of creative genius, bad business decisions and petty back-stabbing. Progenitors of Spider-Man, the Avengers and the X-Men, Marvel’s rocky road to merchandising success is as epic as any of the company’s four-color adventures. Howe pulls no punches as he details the fledgling enterprise’s slow rise from Timely Publications in 1939 to its official emergence as Marvel Comics in 1961, when the groundbreaking brilliance of writer Stan Lee and artists Jack Kirby and Steve Ditko led to the creation of the company’s most iconic characters. In an era before movie-making technology facilitated lucrative cross-merchandising, however, Marvel struggled financially while its editors massaged the bruised egos of freelancers who poured their lifeblood into creations in which they didn’t retain an ownership stake. Kirby, bitter over what he perceived as Lee’s efforts to take undue credit for his stories, ultimately left, becoming a rallying point in the struggle for the rights and compensation of writers and artists. Lee relocated to Hollywood in an effort to bring Marvel’s characters to the big screen, a frustrating endeavor that would take decades and a procession of other individuals to come to fruition. Compared to the thorough account of Marvel’s formative years, Howe gives relatively short shrift to recent corporate machinations—including only a brief mention of Disney’s $4 billion purchase of Marvel in 2009—and the work of current superstars, but that’s a minor quibble in what is otherwise a nuanced and engrossing narrative of a company whose story deserves its own blockbuster film.

Brilliantly juxtaposes Marvel with its best characters: flawed and imperfect, but capable of achieving miraculous feats.