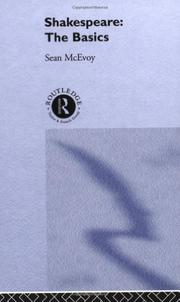 McEvoy, a British professor of drama and English, offers graduating high school seniors a concise and even-handed view of the Bard the way they'll be expected to see him in college English classes.

Every school of modern thought seems to have found a way to draw Shakespeare into its arsenal of argumentation; in particular, the Marxists and the feminists have found much to say about A Midsummer Night's Dream and The Taming of the Shrew. McEvoy is refreshing in that he takes no sides and instead presents these and other (more traditional) views of the greatest English playwright's work with grace and finesse. His goal is to prepare the high school student, who has been forced to read these plays as mere books—ripe for extraction of plot and character—for a university-level analysis of Shakespearean drama. McEvoy makes a nuanced, multifaceted argument for the plays as theater, not literature, emphasizing the importance to Shakespeare of stage directions, the physical orientation of the playhouse, and interaction with the audience. He presents each controversial aspect of textual meaning through several different ideological prisms, with particular attention (but not favoritism) given to feminist critique. Sidebars in each chapter build a sturdy cultural context, surveying the historical evolution of gender roles, social mobility, theater companies, playhouses, and more. The second half of McEvoy's study tracks the principal features of each Shakespearean genre, suggesting (but not insisting) that certain overarching themes tie histories, tragedies, comedies, and romances together in a coherent, if not neat, bundle. A minor criticism could be lodged against this American edition for stubbornly refusing to adapt to the idiom of its new audience: US college freshmen are likely to be nonplussed by references to `A-levels,` professional soccer, and British popular culture.

A strong, systematic, and ideologically unbiased introduction to Shakespeare, bound to deepen any reader's appreciation for the great playwright, and particularly suited to prepare college freshmen for deeper reading of Elizabethan drama.