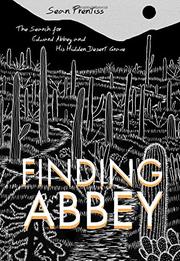 The Search for Edward Abbey and His Hidden Desert Grave

It’s on a hillside, within view of roadless desert and dug deep to keep the coyotes out. Prentiss (Creative Writing/Norwich Univ.) roams sun-struck country to find a famed grave, having narrowed its location down to a Massachusetts-sized parcel.

The late novelist and environmentalist Edward Abbey (1927-1989) liked to imagine that he’d be reincarnated as a turkey vulture, floating on thermals and feasting on carrion. He likely didn’t imagine that he’d become the subject of exercises in creative nonfiction, but Prentiss offers a book that’s part memoir, part literary appreciation, part biography, part travelogue, part jeremiad for what the rest of the world has become. These parts are of uneven value. On the biographical front, Prentiss, who never knew his subject personally, has little to add to the standard works on Abbey, many of which are also uneven. Prentiss brings value to the proposition by interviewing numerous people who did know Abbey, and he settles a few matters that will nonetheless provoke controversy precisely because they’re mentioned at all: the alcoholism (what causes esophageal varices, he asks a counselor and then a doctor, and the answer comes back, “Drinking”), the lechery, the racism. The appreciation is very good: Prentiss offers fine, thoughtful readings of Abbey’s writing, and he applies it judiciously to his life and ours. The reverie of the desert—well, Abbey would doubtless grin wolfishly and disdainfully at effusions such as this: “In this landscape, my tongue is fat from dehydration. My scalp and neck sunburned. Cactus needles hang from my calves. Small rivulets of blood stain my legs like badges of honor.”

For Abbey completists, though, they’ll be divided: does Prentiss give away too many secrets in his quest for the final resting place? Those fans will want to read this book and argue about it over a desert campfire.