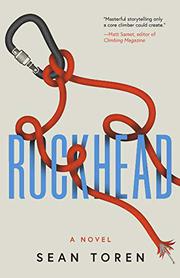 A debut novel tackles the question of how to achieve personal awareness, using rock climbing as a backdrop.

Toren, a psychotherapist and climber, has built his story around an adrift protagonist in his late 20s. Atlas has a difficult decision to make. Dade, his longtime rock climbing partner, has called, singing the siren song of Yosemite, Atlas’ dream ascent. But Atlas has already promised his girlfriend, Olive, that he would move with her to New York and take an office job. In essence, he would become an adult. So Atlas does what he does best—he waffles. He tells Olive that he’s going to complete a couple of handyman jobs with Dade, then follow her east. Dade knows his climbing days are ending, as his wife, Beverly, is expecting their first child. Dade convinces the oh-so-willing Atlas to take a couple of training climbs with him. At one site, Atlas reunites with climber Ruby Goldberg, the girl who got away. Ruby and Atlas pick up where they left off. Soon, Atlas starts forgetting about Olive, thinking he’s back together with his soul mate. While Atlas wrestles with his messy relationships, he and Dade reach Yosemite. They face myriad difficulties and perils during their El Capitan ascent. Eventually, Atlas reaches his rockhead, an intense state of awareness. Toren’s story surely speaks to rock climbers, both the dedicated and occasional ones. The author does an admirable job of going inside a climber’s world, describing the various facets of the sport and van life. Anyone can experience the thrills and the danger involved here. But nonclimbers will be quickly hanging on for dear life as Toren scatters many technical terms all over the rock formations. It’s possible to gauge what some phrases mean from the context, but a glossary would have been helpful. In addition, the author’s philosophical passages have an ethereal, have-to-be-there quality to them. Toren’s characters will leave readers with mixed feelings. These extreme athletes should be admired for their courage and strength. But some, especially Atlas and Dade, appear to be Peter Pans, unwilling to fully embrace adulthood when it interferes with their passion. Still, this comprehensive portrait of climbing deftly answers the question of why people attempt it.