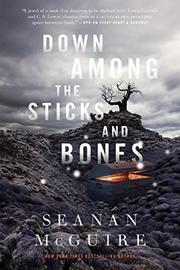 DOWN AMONG THE STICKS AND BONES

From the Wayward Children series, volume 2

This second novella in the Wayward Children series (Every Heart a Doorway, 2016) explores the origins of casually ghoulish Jack and her beautifully dressed serial-killer sister, Jill.

The emotionally chilly Wolcotts regard their twin daughters as ornaments to their lifestyle, clay to be forced into molds designed to make their parents look good. Although the girls are identical, the adults decide that Jacqueline is "the pretty one,” who will wear lovely dresses and shun dirt at all costs, while Jillian is "the sporty one,” who will forge boldly ahead and win medals. Neither girl is really comfortable in her assigned role, and that discomfort creates a rift between them. That rift widens dangerously when the girls discover a set of stairs leading to the dimly lit land of the Moors, inhabited by dark gods, monsters, mad scientists, and ordinary villagers who somehow manage to (mostly) survive the treacherous environment. When offered a choice, the two sisters welcome the chance to switch roles. Jacqueline becomes Jack, the apprentice to mad scientist Dr. Bleak, while Jill is adopted by the local vampire lord, his pampered food source until she turns 18, at which point he will make her a vampire. Jack discovers a love for the resurrection sciences as well as for the local innkeeper’s daughter. Jill loves being outrageously spoiled and pressuring the mortal locals to bow to her whims out of fear of her “father.” But Jill’s impatience to become immortal, a desire to prove herself to her “father,” and continued resentment of her sister lead to tragedy for them both. McGuire deftly depicts how love can bloom in the most unlikely places while the lack or distortion of love can be devastating.

The trappings of gothic fantasy act as an eloquent backdrop to this vivid portrayal of a painfully dysfunctional family.