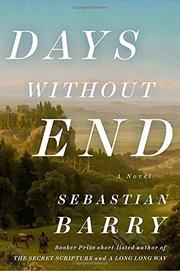 A lively, richly detailed story of one slice of the Irish immigrant experience in America.

Orphaned in the famine—“all that was left in Ireland was the potato for eating and when the potato was lost there was nothing left in old Ireland”—Thomas McNulty is fresh off the boat in the U.S. when he finds himself wearing blue, packed off to the West to fight Indians. He's fortunate to have a friend in young John Cole, of a loving if potentially lethal bent. Other of his soldier friends are to varying degrees bloodthirsty, psychotic, or crazy brave, and they work evil on every Indian encampment they find until, sickened by it all, the two soldiers find themselves caring for a young Sioux girl they call Winona. It is perfectly in keeping with McNulty’s dark view of a world in which people are angels and devils in equal measure: “I seen killer Irishmen and gentle souls but they’re both the same,” he reflects, “they both have an awful fire burning inside them, like they were just the carapace of a furnace.” Protecting Winona means putting themselves in the path of their comrades, those among whom they have fought from one end of the country to the other against Indians and secessionists. Extending the McNulty saga from books such as The Temporary Gentleman (2014) and The Secret Scripture (2008), Barry writes with a gloomy gloriousness: everyone that crosses his pages is in mortal danger, but there’s an elegant beauty even in the most fraught moments (“By Jesus he just drives the knife into the chief’s side”). The story is full of casual, spectacular violence, but none of it gratuitous, and with a fine closing moral: everyone will try to kill you in America, but those who don’t are your friends, and, as Thomas says, “the ones that don’t try to rob me will feed me.”

A pleasure for fans of Barry and his McNulty stories and a contribution not just to Irish literature in English, but also the literature of the American West.