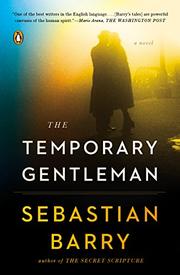 Pensive, quietly lyrical novel by Irish writer Barry (On Canaan’s Side, 2011, etc.), the sixth in a series of books whose stories are separate yet connected.

Jack McNulty, the “temporary gentleman” of the title—that is, an Irishman made into an Englishman in order to serve the crown as an officer—hasn’t had it easy. He’s been torpedoed off the coast of West Africa during World War II, been made wiser and infinitely sadder in love, and now, tucked away in a relatively quiet corner of riotous Ghana in the time when colonial is verging on post-colonial, is steadily inebriating himself (“Into the small hours we drank the palm wine”) into obliviousness. As with the consul in Under the Volcano, drunk gringos do not usually fare well in the tropics. This much we know, and we can foresee the consequences, but the strongest part of Barry’s tale is in its visitation of the past, when McNulty falls deeply in love with Mai Kirwan, the rose of Sligo. There, Barry falls into Joycean reveries: “And what I see is an essence which is in itself solo and isolated, but still a woman replete, laden with gifts, musical, athletic, clever as a general, and seems to sit before me, even now, when she is gone, gone for ever, as real as though I could reach forward and touch her, so powerful, so completely present, and so lovely.” Indeed. But why is Mai gone, and why is Jack in near exile at an outpost on the River Volta? Therein hangs Barry’s tale, and though one romantically inclined might accuse him of a cynical attitude toward love, Jack’s actions certainly remind us that a relationship that begins with good intentions so often deteriorates into the idly contemptuous—especially when copious amounts of alcohol are involved.

Grim, even cautionary, from first to last. But, for all that, a beautifully written story of a love lost, and inevitably so.