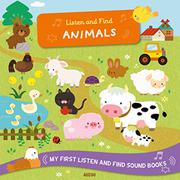 Pictures of animals clustering in a variety of characteristic settings offer toddlers chances to identify one by sight and another (with the push of a button) by sound on each spread.

Kim poses six to 10 smiling, infantilized animals with dot eyes and rounded foreheads in each of eight appropriate locales, beginning with livestock in a farmyard and going on to house pets in a domestic interior, a variety of “Mountain Animals” (including a rescue Saint Bernard with a cask of spirits) on piney slopes, and meerkats and more on an African plain—occasionally with children or other members of an all-white human cast in attendance. Along with visual cues to prompt picking out a particular animal from each group, a repetitive instruction (“PRESS THE BUTTON”) directs attention to eight pictorial buttons on the audio panel mounted next to the block of sturdy board leaves to help in spotting another. Though the lion just emits a dispirited grumble and the wolf sounds startlingly ghostly, the calls at least faintly resemble natural ones. Confusingly, there is no “tiger” button to go with the prompt on the final page…leaving it, deliberately or otherwise, to caregivers to chime in with a live roar. The audio panel, which includes three replaceable button batteries, does not have an on/off switch.