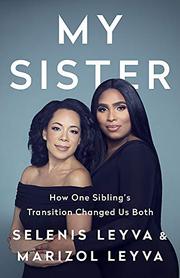 How One Sibling's Transition Changed Us Both

An award-winning TV actress and her trans sister tell the story of how they learned to navigate the difficult, often troubled waters of gender transition.

A year after Selenis’ mother and father became foster parents, they took in—and later adopted—a child named Jose. Immediately, Selenis noticed he was different. As a baby, “his cry was desperate,” as though he was already “struggl[ing] with his existence.” In a three-part narrative that moves between Selenis and her adopted sibling, the pair offer an intimate, often moving account of their journey toward loving acceptance of each other. Part I deals with the years before that sibling's transition into Marizol. Using masculine pronouns and Marizol’s male deadname, Selenis recalls how Jose loved to play with hair and makeup. Despite Selenis’ support, he still faced pressure from his adopted family to conform to a masculine gender identity. Seeking answers and support from social media and elsewhere, Jose first identified as gay before coming out to Selenis. But a question she posed—“did [he] want to be a woman?”—catapulted Jose into the period of transition and self-acceptance, which the authors cover in parts II and III. Moving beyond the confines of his Bronx Latinx community, contact with other trans individuals proved liberating. However, transitioning into Marizol meant facing often painful, sometimes dangerous circumstances. In and out of Selenis’ life, Marizol turned to sex work to support herself and later experienced abuse at the hands of a sadistic boyfriend. Meanwhile, Selenis’ work as a TV actress (most notably on Orange Is the New Black) brought her into contact with trans actor and activist Laverne Cox, who helped her better understand Marizol’s struggles. Determined to help her sister, Selenis brought her sister to a New York LGBTQ center where Marizol could safely come into her own. Fiercely honest, this book not only chronicles a harrowing journey to self-acceptance; it also celebrates an interpersonal love that transcends the bounds of blood and family.<