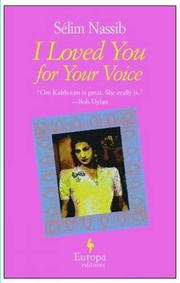 I LOVED YOU FOR YOUR VOICE

A fictional memoir of the intense, symbiotic relationship between an Egyptian poet and the Arab world’s greatest female singer.

In rapt, lyrical prose, Paris-based writer and journalist Nassib spins a rhapsodic narrative out of the indissoluble connection between two creative souls inextricably bound by their art. His nameless protagonists, the poet and the singer, are based on historical figures Ahmad Rami and Om Kalthoum, and their story plays out against the transformative political events of 20th-century Egypt. Returning to his nation in the early 1920s, shortly after Independence Day, the poet is invited to attend a concert at which his words are brilliantly interpreted and sung by a young peasant girl dressed as a Bedouin boy. A spark ignites between the gifted writer and the astonishing performer, and he willingly agrees to write more aching poetry for her to sing. In keeping with the nation’s mood, the singer, whose fame advances rapidly, casts aside the influence of her lowly family to personify the modernism of the new age. Dubbed the “Star of the Orient,” she spends many years unmarried, although gossip about her private life abounds. Over time, their attachment becomes a voracious, destructive factor in the poet’s life. When relations are cool between them, he understands the full measure and pain of the inhuman force uniting them, which also drives a wedge between him and his wife Hoda. The diva performs across the Arab world and at every key national event, coming to embody the country’s progress as it moves through a military coup, the rise of Nasser, then the Suez era. By the time of the Six-Day War, she is over 60, and the defeat causes a collapse, but she rallies and leads the effort to mobilize the country. Her funeral in the 1970s, and Nasser’s assassination, mark the end of hope for “eastern modernism.”