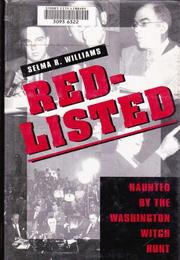 Haunted by the Washington Witch Hunt

Here, Williams (Divine Rebel, 1981) gives voice to those silenced lawyers, academics, and civil servants—the nearly invisible federal employees who filled the government's vital middle ranks—whose lives and careers were destroyed by the federal loyalty program whose purpose was to expose Nazis and Communists in government. Between 1934 and 1974, thousands of federal employees were investigated and either dismissed or bullied into resigning by various committees that suspended protocol and deprived good citizens of their basic rights of privacy, speech, and association in the misguided pursuit of spies—although none were actually identified. Williams focuses on about a dozen victims whose terrible ordeals survive in FBI dossiers, diaries, and—although the subjects are now in their 70s or 80s—in the still painful and embattled conversations of the accused. Jessica Davidson, for instance, a young lawyer working for the NLRB, was forced to resign because she belonged to the Washington Bookshop (a cultural oasis in Washington that for no special reason was placed on the perilous ``Attorney General's List'') even while her colleague stayed on as a demoralized, paranoid, ``mentally paralyzed'' functionary. Another victim, a brilliant self-described ``iconoclast,'' was dismissed, the epithet ``Disloyal'' scrawled across his dossier although he had devoted his life to government service. Meanwhile, Williams says, real Communists evolved into superpatriots and became informers, still justifying themselves 40 years later. Some others, such as Conrad Snow of the State Department, defied Joseph McCarthy and survived—but with diminished stature and reputation. Two ironies emerge from Williams's study: that even as America fought Hitler, its government was not only banning but burning books; and that fear of being branded as disloyal drove out some of the most loyal and talented of public servants just when they were most needed. A balance of chilling documentary evidence with poignant personal reminiscence.