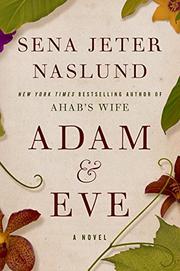 The story of the story of Genesis, and a love story reminiscent of Joan Crawford’s worst movies are, uh, juxtaposed, in this very earnest sixth novel from the industrious Kentucky author (Abundance, 2006, etc.).

Set in the near future, it begins with the narration of Lucy Bergmann, widowed when her husband Thom, a renowned astrophysicist who had discovered evidence of extraterrestrial life, is brought rudely back to earth, so to speak, when a piano falls from the sky onto him. Inspired to continue Thom’s work, Lucy educates herself as needed, accepts numerous invitations to scholarly conventions and whatnot, and happens to be airborne en route to Egypt when engine trouble and the Hand of Fate steer her toward the nubile naked form of wounded American soldier (yes, dear readers, we’re still Over There) Adam Black, having awoken—like his biblical namesake—in the Mesopotamian desert, to a new world waiting to be claimed by this transplanted Iowa farm boy. Eventually this Adam, whose ingenuous ingenuity recalls the gnomic nonwisdom of Chauncey Gardiner in Jerzy Kosinski’s Being There, and his new Eve leave their garden and end up in France, in flight from Thom’s old colleague and enemy Gabriel Plum (“a serpent”) and into the orbit of anthropologist and cave-painting aficionado Pierre Saad, whose multicultural pedigree and ethos heighten his interest in The Object (which Hitchcock would have called the MacGuffin) that proves the world’s four major religions have a common origin. Traditionalists, needless to say, disagree: hence, this overheated novel’s ineffably risible climax. The book groans with faux-biblical encomia to Adam’s pristine naturalness (e.g., “And Adam touched himself, till he was satisfied” [the reader likewise groans, but not with pleasure]). Even stagier are its abundant rhetorical questions, such as Pierre’s “Are we so different from people who lived eons ago?”

Hmmm…wonder what the Texas State School Board will think of this one?