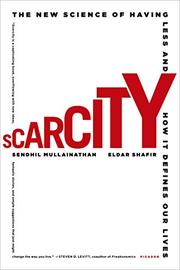 Why Having Too Little Means So Much

An intriguing discussion of poverty and scarcity that uses the tools of behavioral economics and offers some different approaches to mitigation.

Mullainathan (Economics/Harvard Univ.; co-author: Policy and Choice: Public Finance Through the Lens of Behavioral Economics, 2011, etc.) and Shafir (Psychology and Public Affairs/Princeton Univ.; editor: The Behavioral Foundations of Public Policy, 2012, etc.) compare scarcity in different forms—financial, but also in relation to time, diet and loneliness—reporting on psychological tests and human and organizational activity to develop their idea that scarcity can be approached from a cognitive standpoint. The authors discuss the concept of “tunneling,” in which focus is so tightly confined that alternate or broader considerations are excluded, and “bandwidth tax,” where “poverty itself taxes the mind…reduces fluid intelligence and executive control." The authors stress that their approach to scarcity is different than that of economists. They distinguish between “physical scarcity,” which they say “is ubiquitous,” and “the feeling of scarcity,” which is not. They examine the mechanics of payday loans and the way market vendors in the Indian city of Chennai finance inventory, and they discuss how choices are constrained by habits of thought. They insist that scarcity “is not merely the gap between resources and desires on average.” Managing slack, as well as relative plenty, matters as much as managing scarcity, and incentives prove more powerful than education in changing habits. “As we contemplate the better management of scarcity,” they write, “we should remember that scarcity often begins with abundance. The crunch just before a deadline often originates with ample time used ineffectively in the weeks preceding it. The months just before harvest are particularly cash tight because money was not spent well in the easy months following last harvest.”

An appealing, very different approach to a pressing problem.