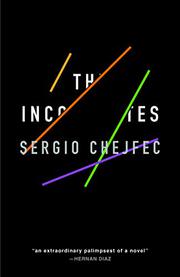 A novel of lonesomeness and recollection that takes the construction of characters as its subject.

The question "Who's responsible for this?" often takes on a tone of indignation, but in Argentine writer Chejfec's latest novel it's not an admonishment so much as a practical consideration. As the book opens, the narrator informs readers that he is going to tell us a story—"something that happened one night, years ago, and the events of the morning and afternoon that followed"—and yet the novel is filled with several stories, large and small, as well as multiple nights and evenings. Just as the missives described by the narrator from his friend Felix grow from postcards to full-blown letters, so too do the accumulated moments grow larger and more significant as the novel moves from Buenos Aires to Barcelona to Moscow, where Felix checks in at the Hotel Salgado. From there Felix's story intersects with that of Masha, the hotel's owner. We're let in on her innermost thoughts and feelings, as we are with Felix’s. She's as persistent as Felix is transient, going about her day wrapped in shapeless bundles and gliding across the floors in shearling boots as she completes her tasks. As their stories begin to intertwine and pieces of their stories begin to resemble one another (a woman whom Felix met at lodgings prior to the Hotel Salgado complained to a clerk about losing money in her pants; Masha, while cleaning a room she is staying in, finds a stack of money in the closet), readers are uneasily reminded of the fact that, in the end, neither Felix nor Masha is telling the story at all. They barely say a word—it is the narrator adorning simple correspondence from a friend with drama and stemwinding diction. The effect it conjures gets at the heart of narration in general: What is the responsibility of the storyteller to adhere to the facts as told? Is it possible to ever completely know what happened? If the story is vivid and engaging—as this book is—does it matter?

In this innovative novel, Chejfec is gesturing toward the grand European traditions on his own terms.