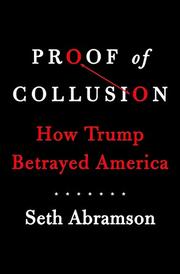 A former criminal defense attorney and legal analyst sifts through much of the “damning” evidence of Russian ties to Donald Trump, specifically in terms of criminality.

Abramson (Digital Journalism, Legal Advocacy, and Cultural Theory/Univ. of New Hampshire; Golden Age, 2017, etc.) uses a two-tiered approach: a summary of evidence and a compilation of news stories that he has linked to his Twitter feed since January 2017. As such, there is much that is overlapping and repetitive as he moves chronologically through the years of Trump and his associates’ dealings with Russia, from the 1987 attempts to create a Trump hotel in Moscow and “rigging” of the 2002 Miss Universe pageant to the actions of dozens of the “Trump Team” in creating a “back channel” to funnel National Rifle Association money and Russian support into Trump’s incipient presidential campaign. The author minutely examines the many troubling threads to this labyrinthine story. Among them: the alleged kompromat recording of Trump’s scandalous meeting with prostitutes in the Ritz-Carlton Moscow suite in 2013; the covert activities of Russian operative Maria Butina to establish a hidden link between the Kremlin and Republican leadership; the establishment of Trump’s National Security Advisory Committee in early 2016 (many of whose members had “puzzling contacts with the Russians”), which coerced the GOP to change its platform at the Republican National Convention to ease the anti-Russian stance on Ukraine; and Trump’s overt “aiding and abetting” activities in publicly encouraging Russian cyberaggression months after he was officially informed as a presidential candidate that Russians were involved in the hacking of the Democratic National Committee. There are so many bizarre turns to this ongoing saga that Abramson fears the truth will take many years to come to light. Still, he expresses confidence that Robert Mueller’s final report will present “an entire landscape of graft Americans can’t now contemplate.”