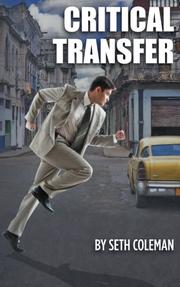 The hero of Coleman’s debut thriller has a lot to prove, including his innocence.

Peter Barrett almost had it all. He was a vice president at Hudson Enterprises, a reputable computer corporation, and he had a gorgeous wife, “two expensive cars and a home worth more than five million dollars.” The only thing he didn’t have? His father-in-law’s complete respect—and his father-in-law just happened to be his boss. Peter entered into a “high-stakes business gamble” that required him to transfer $70 million of Hudson Enterprises’ money to a government account in Cuba. If the deal succeeded, Peter would win a huge contract that his father-in-law couldn’t help but admire, so when the CIA agent brokering the deal told Peter it had to be kept in the “strictest confidence,” he agreed. The CIA agent promised Peter that the money would be returned to Hudson Enterprises within 45 days, but then the newspapers heard about the transfer—as well as rumors that Cuba was planning to buy medium-range guided missiles with the money. In the eyes of almost everyone, Peter went from being a prosperous businessman to a thief, a traitor and a terrorist. When the novel opens, Peter is trying to grapple with the public revelation of the news. He initially decides against avoiding the consequences and heads to the office, where he assumes he’ll be arrested. But when Peter sees the police and his father-in-law, he decides to follow his instincts and make a run for it. Peter’s race against the clock to prove his innocence will take him to a friend from his past, across the country and even to Cuba. But will that be enough? And will he be able to escape the people who want him dead? Coleman’s characters are vivid and believable; from Peter to his friend Sky, a former actress with an “uncanny sense of street smarts,” Coleman creates people who are realistic and quirky. Unfortunately, though fast-paced, the circumstances are often implausible. First, would Peter really be able to transfer $70 million without anyone else immediately noticing? And second, almost every time Peter gets into a tight spot, he’s miraculously saved by a new character—first Sky, then Sky’s father, then a friend of Sky’s father, among others. His adventures would have been more suspenseful if more often he’d had to rely on his own wits.

Even if the dramatic tension sometimes sags, well-drawn locations and intriguing characters keep this thriller enjoyable.