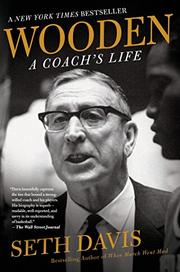 A comprehensive and crisply written biography of a legendary coach.

John Wooden (1910–2010) may well be the closest the sports world has had to a secular saint in the last half-century. Widely venerated for both his accomplishments as an athlete and coach and for his stature as a human being, Wooden remained a universally admired figure for the remainder of his life. Sports Illustrated senior writer and CBS Sports studio analyst Davis (When March Went Mad: The Game that Transformed Basketball, 2009, etc.) delivers a massive biography that manages to bolster its subject while reminding readers that for all of Wooden’s greatness, he was a human being with human failings. Utilizing myriad interviews and an impressive array of published sources, the author traces Wooden from his humble childhood in Indiana through his overlooked playing career, which garnered him entry into the Basketball Hall of Fame in 1960, to the coaching career that brought him his greatest glory. Wooden began coaching (and teaching English, his first love) at the high school level and spent two years coaching at Indiana State before moving on to UCLA, where he became quite likely the greatest college coach in history. Davis admires his subject, which is apt, since Wooden was unquestionably admirable. However, a true biographer strips away legend as much as burnishes it, and Davis is unflinching in doing so where necessary. Early in his coaching career, Wooden, widely respected for his views on race during his UCLA tenure, still could have done more for his sole black player at Indiana State, who faced Jim Crow on a number of occasions with Wooden’s tacit acquiescence. Long lauded for his personal integrity, he nonetheless clearly turned a blind eye to boosters who flouted NCAA rules in providing benefits to UCLA’s star players.

Wooden has long stood as a giant in the world of college sports. In revealing the real man behind the legend, Davis has done honor to the legacy of a true gentleman.