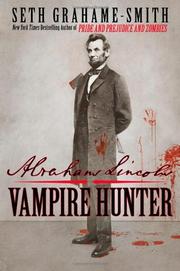 The latest literary experiment from the author of Pride and Prejudice and Zombies (2009).

After striking gold with his gimmicky mash-up between Jane Austen and grindhouse horror, Grahame-Smith takes a stab at creating an original plot with this new historical aberration. The author picks a larger-than-life hero: the legendary 16th President of the United States, Abraham Lincoln. In his fictional introduction, the author claims to have received a visit from “Henry,” a creepy young roustabout whose curiosity leads him to deliver to the writer Lincoln’s lost diaries, detailing his life as a gifted vampire hunter. The fictional Grahame-Smith is instructed to compose a historical biography, resulting in a mimicked, formal study of the late president in the vein of Doris Kearns-Goodwin, infused with a macabre dose of gore. According to the book, when he’s only nine, Lincoln’s mother dies from a supernatural assault, passed off as milk sickness. From that moment, the future president vows: “I hereby resolve to kill every vampire in America.” Subsequently we find him earnestly decapitating America’s vampires with his trusty ax. Not to be missed are Lincoln’s trusty companions in his crusade against the undead, among them the president’s real-life wrestling pal Jack Armstrong, and a New Orleans encounter with a gloomy, little-known writer, Edgar Poe, newly fascinated with stories of the undead.

The book’s grotesque joviality should be fun for those looking for it.