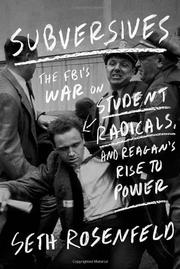 The FBI's War on Student Radicals, and Reagan's Rise to Power

A kaleidoscopic look at the FBI’s willingness to undermine American citizens during the 1960s.

Former San Francisco Chronicle investigative reporter Rosenfeld explores the many ways in which J. Edgar Hoover’s FBI undermined the rights and especially the privacy of American citizens in his efforts to undercut the many protest movements that emerged at the University of California, Berkeley, in the ’60s. Hoover had long been concerned with events at one of the country’s greatest universities, and as the decade progressed, the FBI utilized increasingly devious cloak-and-dagger methods to address those concerns. In addition to Hoover, Rosenfeld focuses on other significant figures, interweaving their stories into his larger narrative. Mario Savio, the star-crossed leader of many of the student movements, drew much of Hoover’s ire. He also drew the ire of Ronald Reagan, an outspoken critic of the left in Berkeley who, upon assuming the governorship of California, created the perfect conditions for his friend and ally Hoover to step up his already pervasive investigations. Caught in between was Clark Kerr, the liberal and often-visionary president of the university who became a target of scorn from Savio and the student left as well as from Reagan, Hoover and the right. One of the subtexts of this masterfully researched book is Rosenfeld’s yearslong struggle to gain access to the relevant FBI documents, a fight that reveals the extent to which the FBI knew how explosive and embarrassing this story could be to the government. In an appendix, the author details that struggle, which “resulted in the release of the most extensive record of FBI activities concerning a university during J. Edgar Hoover’s tenure, and the most complete release of bureau records on Ronald Reagan.”

A potent reminder of the explosiveness of 1960s politics and how far elements of the government were (and perhaps still are) willing to go to undermine civil liberties.