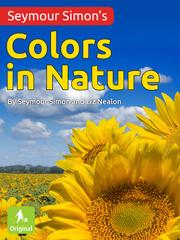 A picture book that takes a vivid look at the colors that surround us.

People take colors for granted. After all, how often does one stop to observe a finely shaded sunset, or the deep, juicy red hue of a perfectly plump tomato? This gorgeously written children’s book explores the colors of the world by detailing flora and fauna of every shade of the rainbow (as well as the rainbow itself). Bold images exemplify each color, from red foxes to lavender amethysts. The book also covers hues that may be difficult to see (such as white wolves against snow), and colors that blend together (such as the blush pink of a flamingo). Readers also learn about instances in which nature changes colors, as when leaves turn from green to red and brown in the autumn chill, or when the sky turns from blue to gray when a storm approaches. Simon’s (Earth’s Moon, 2014, etc.) and Nealon’s book doesn’t disappoint. It’s not an easy task to craft a children’s science book that’s comprehensible to younger readers without ever feeling dumbed-down. The authors, though, are masters when it comes to walking this fine line—they know their audience, and they know how to speak to it. They accompany their text with vibrant photos, boasting such images as fiery hot lava spilling over a mountainside; the golden orange markings of a monarch butterfly; the verdant hue of a tall fir tree; and the crisp blue of an iceberg. The authors pepper the tale with questions that add an air of interactivity, encouraging further discussion between parents and children: “Can you spot three indigos? More? / What else will you find when you explore?” These inquiries urge readers young and old to press on, and perhaps venture outdoors for more colorful research of their own. The book’s focus on education may also make it an asset to schools.