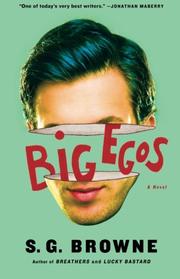 Image, celebrity, truth and consequences all come to a head in this wild satire of a future where everybody can get Warhol’s 15 minutes of fame anytime they need a fix.

A reader would be forgiven for mistaking this razor-sharp sendup for fan fiction at first glance: An unnamed narrator cruises a Beverly Hills soiree, mingling with Jackie O., Freddie Mercury, Evel Knievel and Sid Vicious, among many other celebs. Instead, this fourth novel from comedy virtuoso Browne (Lucky Bastard, 2012, etc.) turns out to be a smart and darkly funny thriller that looks at America’s obsession with celebrity through a truly skewed lens. Our narrator turns out to be head of investigations for a company called Engineering Genetics Organization and Systems, and it makes one consumer product: “Big Egos.” Using genetically modified DNA, the company’s drugs can turn people into a virtually flawless simulation of their favorite dead celebrity or fictional character for up to six hours. Drop a couple thousand dollars and head out for the night as Captain Kirk, Elvis Presley or James Bond—and our narrator has tested thousands of them during his tenure. But things are starting to come apart at the seams with his girlfriend, Delilah, who just can’t seem to stand being herself anymore, and his best friend, Nat, who shuns the drugs at first but then takes to them like an addict. When black-market copies of the Big Egos start killing users, our hero has to use all his wits to get to the root of a nefarious scheme whose origins may be uncomfortably close to home. Browne’s gifts are manifold, and his combination of witty conceptual twists and fast-paced plot and narration are unique. The barrage of pop-culture references may be off-putting, but readers who get the idea should dig it.

A speculative, menacing thriller that asks, “Who are you supposed to be?”