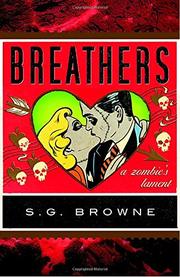 The dead shall walk the earth, and they’re hungry for…love?

Debut novelist Browne branches out from his mostly horror-related short stories and delivers a rousing entry in the Rom-Zom-Com genre. Based on his short story “A Zombie’s Lament,” Browne’s mortality tale begins rather grimly but almost immediately picks up speed and humor to evolve into a terrific comedy about the perils and joys of life beyond death. Browne’s hero is Andy Warner, who survived, so to speak, the car crash that killed his wife but lost his vocal chords along with his life. Reduced to a pathetic existence consisting mostly of downing his father’s wine collection, suffering Glade spray-downs from his mother and attending the occasional Undead Anonymous meeting, old Andy is in pretty wretched shape. His afterlife takes a turn for the better when he meets Rita, a pale but lovely girl who slit her own throat, and Ray, a feisty undead hunter. Before long, Andy is fighting against zombie discrimination, mutilation and other forms of abuse by those unenlightened “breathers”: “After all, what do I have to lose by standing up for myself? If being a rotting corpse with no rights and no future isn’t the worst thing that can happen to me, it can’t be that much further to rock bottom.” The book has its share of gruesomeness, but it also offers astute observations on the world in which we live.

A zombie comedy with brains.