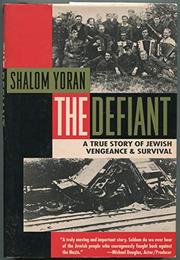 A True Story of Jewish Vengeance and Survival

A breathless Holocaust memoir of a young man who was, variously, victim, avenger, partisan, Polish soldier, and illegal immigrant to Palestine. At the core of the book is Yoran's love for his mother, a strong woman who had instilled her Zionist dreams in her family and had held them together during the war's early days. Soon after the Nazis invaded Poland, Yoran and his brother Musio, urged on by their dying mother (``Go, my beloved children,'' she says, ``and take vengeance for us''), hid out in a small underground bunker in a forest, enduring a bitter winter. Then, driven by their mother's parting words, they emerged and set about taking their revenge. They joined a group of partisans. Yoran, with his Aryan looks, a facility in several languages, and a daunting tolerance for homemade vodka (alcohol, Yoran suggests, caused the deaths of many partisans), moved freely in a variety of dangerous circles. He witnessed hideous atrocities carried out by German and Slavic soldiers and civilians, he heard a great deal, and he forgot nothing. Among the deranged figures he describes are a Nazi who boasted of killing babies and an NKVD agent who swore that he would kill his own mother if she proved to be a counter-revolutionary. Yoran is never reluctant to admit that he was often deeply fearful; despite that, he carried out some audacious bluffs, was involved in a number of vicious gunfights, and participated in some signal military successes with the partisans, including the destruction of German troop trains. The two teenage brothers eventually joined the Red Army and ended by pursuing the retreating Nazis back on to German soil. After a series of postwar misadventures, some of them comical, Yoran finally arrived in his mother's Promised Land. The most chilling, powerful, and well-written wartime memoir since The End of Days. (22 b&w photos, not seen)