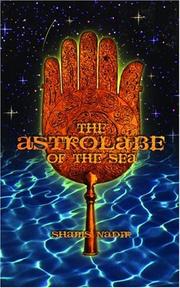 THE ASTROLABE OF THE SEA

The Astrolabe Of The Sea ($10.95 paperback original; Sept. 1996; 128 pp.; 0-87286-314-X): From Nadir (``the pseudonym of a well- known North African writer,'' now living in France): an enigmatic metafiction, volume one of a projected trilogy, in which the title object (a nautical instrument of calculation), recovered after centuries from the ocean depths by a shipwrecked sailor, ``tells'' a series of Oriental-flavored tales that mingle allegorical moralizing about endangered Arab cultures with racy, florid, anecdotes about ``giant bats, evil ogres and voracious succubi.'' Neither the glimpsed presence of a hovering film crew nor the character of the ``novel's'' apparent protagonist is convincingly integrated into the fabric of a surpassingly strange work whose intentions we may hope will be clarified when said trilogy is completed.