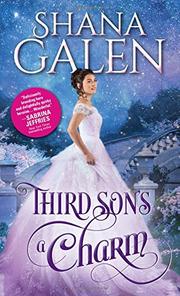 A handsome but illiterate soldier is hired to guard the honor of a headstrong and heartsick lady. But can he protect his heart from her?

Ewan Mostyn is one of Draven's Dozen, a special unit of English soldiers "chosen for some of the most dangerous missions in the war against Napoleon," many of them younger sons of noble families. After the war, he's a glorified bouncer in the gaming hell where he lives as part owner. After watching him break up a fight, the Duke of Ridlington hires him to ensure that his daughter, Lady Lorraine, doesn't elope with Francis Mostyn, Ewan's cousin. Lord Ridlington is convinced that Francis is after Lorraine's sizable dowry, and Ewan, who was bullied by his cousin as a child because of his difficulty reading (today he would probably be diagnosed with dyslexia), is only too happy to take the job if it will allow him to thwart his tormentor. As Lorraine and Ewan grow closer, Ewan begins to realize that what he first thought of as Lorraine's shallowness is actually inexperience. When Lorraine realizes Ewan can't read, she sets up late-night meetings in her father's study to help him. Eventually, Ewan gets through to the hotheaded lady under his protection and helps her see that Francis isn't in love with her and that, actually, she's in love with Ewan. Francis hatches a plot to regain her affection by saving her from kidnappers he hires. It's up to Ewan, with help from members of Draven's Dozen, to come to her rescue. Galen has written a story that will leave readers as satisfied as her spunky heroine.

Come for the brooding, silent hero and a loquacious heroine finding her strength. Stay for the bromance between war vets and especially for the aching chemistry between Lady Lorraine and her fierce bodyguard.