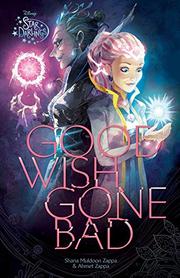 From the Star Darlings series

The Star Darlings series expands from chapter books (and television) to middle grade with this book launching the new line.

Although it takes place after the original 12 Star Darlings books, the majority of this book consists of flashbacks around the relationship of Starling Academy headmistress, Stella, and primary antagonist, Rancora. After their successful missions, Lady Stella gathers the Star Darlings to inform them of the oracle’s missing page, presumably stolen by Rancora, and the possibility that they may be called upon to stop her future schemes. Then the Star Darlings investigate and uncover the three flashback stories. The first (and most successful) takes readers to Stella’s and Cora’s school days as best friends and the betrayals that tear them apart; the second covers Stella’s wish-granting innovations and the dark cloud that hangs over the horizon; and the third describes Rancora’s schemes and nefarious activities leading right up to the original series. The wish action includes some head-scratching logic as well as simplistic takes on feminism and racial justice—but the book clearly means well. Finally back in the present timeline, the Star Darlings have a blink-and-it’s-over encounter with Rancora followed by a reiteration that they’ll need to stop Rancora again—in future installments, obviously.

Back-story heavy and with a large, difficult-to-keep-straight cast, this is only for fans of the original series as they age out of chapter books.