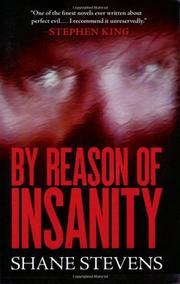 BY REASON OF INSANITY

In the opening scene of this interminable kill-a-thon, a ten-year-old lad named Tom bops his sadistic mother, stuffs her in a flaming furnace, and, when found by the cops, is eating mom's charred flesh. Who is this precocious tot? Well, according to Stevens (whose bloodthirstiness was more effective in such as Dead City and Ratpack), he's the illegitimate son, via rape, of Death Row's Caryl Chessman; or at least both mother and son think he is. At any rate, the kid is k-razy, even more so after ten years in a state asylum, from which he escapes at 21 and commences ""a murderous reign of horror and destruction that would shake the sanity of the nation."" Tom, you see, being ""an authentic monster, with no true feelings except hatred"" and having a ""wonderfully devious brain,"" is able to get away with murder after murder: he has faked his own death (with implausible success), and so no one suspects that he is the famed ""mungo-maniac"" who is clobbering and mutilating dozens of women, forcing fellatio on their dead mouths, and leaving behind a ""CC"" (for Chessman) signature. No one, that is, except Adama Kenton, hotshot reporter for Newstime, who, after some 400 treading-water pages, uses glib Reader's-Digest pyschology to figure out the maniac's identity. As the man-hunt then accelerates, the killer escalates--collecting bodies in a Soho loft (draining their blood), mailing mutilated private parts to the Daily News, and finally (in drag) nearly wiping out an entire women's residential hotel, floor by floor. Bloody, vicious pulp--unredeemed by a few vivid scenes and some debates on capital punishment and journalism ethics, amateurishly plotted (gross coincidence abounding), and padded out to numbing, sickening length.