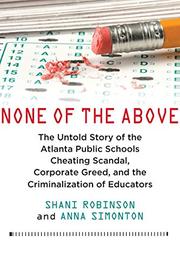 NONE OF THE ABOVE

The Untold Story of the Atlanta Public Schools Cheating Scandal, Corporate Greed, and the Criminalization of Educators

A former teacher convicted in the Atlanta Public Schools cheating scandal makes a strong case that students have been cheated by corporate profiteers and racist policies that undermine public education.

Writing with journalist Simonton, Robinson offers a personal story of false accusations and a trial gone wrong within a larger story of political machinations and student performance as pawns in a racist game. The narratives don’t quite mesh, as the personal one becomes detailed past the point of repetition and the larger one could justify a longer book of its own. However, both stories will leave readers feeling Robinson’s outrage. She casts herself as a bit player who unfairly found herself cast as a public enemy, facing jail time for a crime that she convincingly claims she didn’t commit. The author was a neophyte who would receive no bonus for higher test scores, and by the time she was charged in a racketeering conspiracy to defraud the school system, she had already left teaching for social work. So what did she do? According to her, it all came down to a forgettable 20 minutes when she was asked to erase “stray marks” from some of her students’ tests, which might interfere with computer scoring. She was not asked to change any answers, though someone else might have, since the teachers later wondered how some students could have scored much higher than their class performances would have indicated. The investigation cast a wide net, and Robinson was charged based on the testimony of others who agreed to a plea bargain, including the supervisor who asked her to erase the marks. She was urged to take a similar deal and refused because she insists she had done nothing wrong. She is now appealing. The author relates her story at length amid decades of context on the privatizing of both public schools and prisons, the connections between real estate and public education, the racism underlying urban renewal, and the other factors that have left the Atlanta schools where they are.

Robinson claims she didn’t do it, and her book leaves no reason to doubt her.