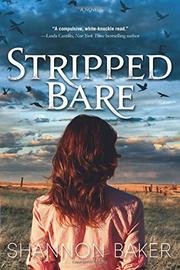 A Nebraska ranch woman’s life is turned upside down by a murder.

Kate Fox lives in the Nebraska Sandhills with her husband, Ted, who’s the local sheriff, and her teenage niece Carly, who’s developed a wild streak since the deaths of her parents. Kate gets a hysterical call from Ted’s old girlfriend Roxy saying Ted’s been shot and Carly’s paternal grandfather, well-to-do rancher Eldon Edwards, is dead. Roxy is already at the hospital with Ted’s doting mother; Ted is in stable condition but may be paralyzed. When neighboring sheriff Milo Ferguson voices his suspicion that Ted may have shot Eldon, Kate, furious, vows to investigate. Its size makes the Fox family a powerful force in the area, and Kate gets plenty of unwanted advice from her sisters and brothers when she finds out that Ted’s rekindled his relationship with Roxy, a fact that many other people knew but never divulged. It’s rumored that Eldon was about to sell his substantial ranch to a wealthy Easterner who wants to turn the Sandhills into a buffalo preserve, an idea that doesn’t sit well with most of his neighbors. Since Carly, who’s slated to inherit the ranch, has vanished, Ferguson thinks she may have killed her grandfather. After announcing at a town meeting that she’ll find the killer, Kate barely escapes a car accident that’s no accident at all. Despite her agony over Ted’s perfidy, Kate even teams up with Roxy, who has a big stake in Eldon’s affairs, to question some of the suspects. Between hunting a killer and tending her calving cows, Kate has plenty to do, but she can’t help wondering what to do about the husband she loves but can’t trust.

Baker (Tattered Legacy, 2015, etc.) serves up a ballsy heroine, a colorful backdrop, and a surprising ending.