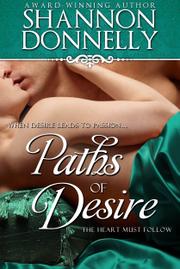 Donnelly (Cat’s Cradle, 2011, etc.) spins a sizzling regency-era romance about an actress seeking security and a married adventurer who can give her anything but.

Thea Newell, a stage actress with a fizzling career, has her mind set on marrying the widowed, wealthy Lord Shelburne. All is going according to plan until Shelburne’s friend, David Llewellyn, returns from exotic lands intending to thwart Thea. His plan falters, however, when his attraction to her grows. The problem? David is a married man. Granted, he’s unhappily married and his wife seems to share that sentiment. But rather than addressing adultery as a serious issue, Donnelly treats it as a plot device. David’s marital status shapes his love affair as a legal problem, since he cannot marry Thea and offer her the financial security for which she yearns. Otherwise, little dilemma exists and no one gets hurt. David’s adulterous deeds may even seem glorified at times, portrayed as the rightful, inevitable outcome of his lust and love for Thea. As spare as this storyline may be, Donnelly undeniably knows her craft and she pieces together a well-paced, engaging novel. Thea keeps her past a mystery to those around her, and as the most tragic details unravel, readers cannot help but want to know more. Readers will easily engage with and feel sympathetic toward Thea. While their affair begins with a great deal of steam and little in the way of substance, the two protagonists eventually express a genuine love for one another.

Readers with a low tolerance for smut may wish to stay away, as the book has quite a number of sex scenes, but for those who enjoy that sort of thing, the novel offers a fair balance of plot and heat.