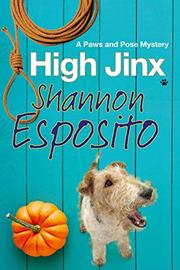 Doga yoga instructor Elle Pressley’s latest high-maintenance client turns out to be the least of her worries when she’s the last to see a dead man alive.

Of all the drawbacks you might imagine to being a doga (dog yoga) instructor, getting involved in murder isn’t the most likely—except for Elle Pressley, who’s hired to give lessons to Athena, the dog of Selene Beckley’s grandmother Flavia. Following a session with Flavia and Athena, Flavia takes a shine to Elle and warns her about the dangers of the evil eye, filling her with Greek lore that makes Elle worry she’ll be cursed if she exits a house incorrectly. But Elle feels nothing but good vibes now that she and her pup, Buddha, are staying with her handsome private-eye boyfriend, Devon, and his dog, Petey. Maybe it was lucky that her place was damaged in a fire. Though Elle knows that Devon will leave town when he solves his parents’ murders, she’s happy to have time to accompany him to Selene and Michael Beckley’s Halloween bash, a must for the Moon Key socialites who are Elle’s clients, if not her friends. While she’s at the party running an errand for Flavia, Elle finds Michael murdered in a horrible prank gone wrong. The police question Elle, the last person to see him alive, and wonder if she may have inside information, though she seems to have precious few answers. In addition, the young woman accused of the murder reaches out to Elle for help. As Elle starts to investigate, the stumbling blocks she hits make her wonder if she hasn’t been cursed after all.

Too many new ancillary characters and an incongruously violent climax only muddle the second installment in this series, which will hopefully return to form next time.