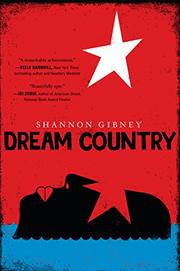 A comprehensive, but not entirely cohesive, timeline introduces a family beginning in 1827 at a plantation in Virginia. The story moves through the brutal colonization of Liberia, detailed further in the backmatter, by Europeans alongside white Americans and freed or escaped black slaves and ends with the prescient voice of Angel, a “black-African-queer” woman in present-day Minnesota. Gibney creates clear voices for her characters, most strikingly with 16-year-old Kollie, a Liberian refugee whose experience at his high school explores a microcosm of real discord between African-Americans and immigrants or refugees from myriad African countries living in the U.S. The naming of specific tribes in what became Liberia, and the inclusion of traditional proverbs alongside quotations from African-American writers, further spotlights the complicated, ever intertwined existences of black people all over the world. A nuanced focus on Liberia through the perspective of this one family, five generations described in five parts, therefore becomes a moving and melancholic metaphor for the struggle for place and home experienced by those still trapped by the legacy of the triangle of trans-Atlantic trade.

A necessary reckoning of tensions within the African diaspora—an introduction to its brokenness and a place to start healing.