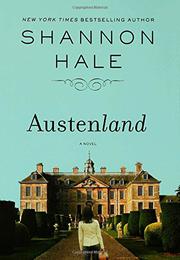 Yet another player in the literary parlor game of re-writing Jane Austen.

From the dedication to Colin Firth, Mr. Darcy in the 1995 BBC miniseries, Hale, author of YA novels (River Secrets, 2006, etc.), lets the reader know her tongue is firmly in cheek. Hale’s heroine, Jane Hayes, is a single New York professional with a secret passion for Pride and Prejudice—not the novel, but the more over-the-top romantic screen versions, particularly the one starring Firth. Shortly after her Great-Aunt Carolyn discovers Jane’s obsession, the old lady conveniently dies, having bequeathed to Jane a three-week stay at Pembrook Park, a fantasy version of a Regency England country estate (modern plumbing, but no cell phones allowed). Temporarily re-christened “Miss Jane Erstwhile,” Jane soon finds herself plopped into the center of several Austen novels rolled together. Her fellow guests are the pathetically needy “Miss Charming” and the gentle, genuinely charming “Miss Heartwright.” Knowing that the hosts and male guests are clearly actors does not keep Jane from confusing fact with fantasy. As she resists the falseness of the situation, she falls into a contemporary fling with Martin, an actor playing a gardener on the estate, with whom she watches television and makes out. She also finds herself drawn to “Mr. Nobley,” a Darcy stand-in. But is it the character being played whom she’s attracted to? Or the man playing him? The novel is clever in its depiction of the many ways in which romance can fall away, and Jane is no fool as she attempts to sort out the real from the make-believe. Readers will be as surprised as she is by some of the twists. But ultimately this is a romance novel in which lovers who are meant to be together overcome miscues and misunderstandings before the final clinch.