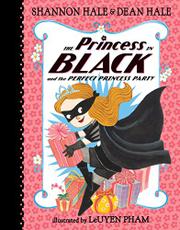 THE PRINCESS IN BLACK AND THE PERFECT PRINCESS PARTY

From the Princess in Black series, volume 2

Prim, proper Princess Magnolia is all decked out in her pink finery, awaiting the arrival of a dozen ethnically diverse fellow-princess party guests for her birthday when her monster-alarm ring goes off. She changes attire and personas, becoming the heroic Princess in Black. Working swiftly, she saves a goat from a hungry monster and gets back to her palace in time to welcome her guests. But just when she thinks she’s in the clear and ready to open her presents, off goes her monster-alarm ring again! This pattern—Magnolia is just about to open presents when her alarm goes off, she comes up with a distraction for the princesses, defeats a monster, and returns just in time—continues through the book. It’s enhanced by visual gags, such as Magnolia’s increasingly flustered appearance, and hilarious depictions of the various ways monsters try to eat goats, from between giant pieces of bread to in a giant ice cream cone. A side character, the fittingly named Princess Sneezewort, frequently comes close to discovering Magnolia’s secret. In the end, Magnolia can’t take the constant interruptions anymore, yelling at a monster that it’s her birthday—the monster, abashed, ends up helping her in one last distraction for the other princesses.

A chuckle-inducing, entirely worthy stand-alone follow-up to the terrific The Princess in Black (2014).