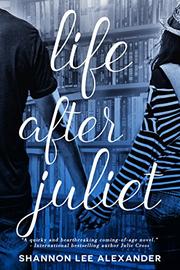 In this YA coming-of-age novel, a teenage girl who’s lost her best friend must learn how to open her heart again.

With sharp prose and unsentimental language, Alexander (Love and Other Unknown Variables, 2014) invites readers into the world of high schooler Becca Hanson, a quiet loner whose closest friend, Charlotte, died six months before. Becca’s world has grown dark with grief, and she doesn’t know how to let the light back in—even when her classmates and family members try to get through her tough emotional armor. But slowly, she’s forced to lower her shields when she undertakes a project in her literature course with an interested, curious classmate, Max, that draws her into more vulnerable territory. Soon, in a tender moment, she learns that she’s able to open up and talk about her late, beloved friend when she’s in a darkened theater. That same theater soon becomes a safe haven for her in which to form a romantic relationship with Max and to start her healing process. Although the novel touches on heavy themes of death, cancer, and grief, it does so with levity: Becca is quick-witted and narrates the story with a dry, sarcastic inner monologue and rich humor. Ultimately, she finds the stage to be a place where she can draw from her deepest emotions and truest self. The story builds toward a final theatrical performance but also offers a story of how Becca comes of age and reaches a state of grace. This sequel follows characters from Alexander’s previous novel, but it stands on its own as an independent story for readers not yet familiar with the author’s punchy YA fiction. Readers will fall in love with Becca, Max, Darby, and other characters as their soft, awkward moments of adolescence resonate throughout the prose.

A successful story of a young woman’s journey through grief.